Every year, PROWIN A+W Automationstechnik GmbH trains several dual students who end their academic careers with a bachelor’s thesis. However, the supervision of a master’s thesis was a first for the company.
The two mechanical engineering students Lucas Kronawitter and Robert Zitzelsberger started their professional careers during their studies at PROWIN A+W. Both already completed their bachelor’s thesis at the company and were now about to graduate with a Master of Engineering degree. Last hurdle: The master’s thesis.

From the beginning, the students were supervised by their mentors and thus developed a suitable topic. This was so extensive and complex that both works dealt with the implementation:

Development of a safety coupling

Entwicklung einer Sicherheitskupplung
Such safety couplings, which are already available on the market, often limit the drive torque via predetermined breaking points, slip or detent mechanisms. Since these are rotating components that are in direct contact with each other, blockage, seizure or similar undesired switch-off behavior cannot be completely ruled out in the event of a fault. Thus, although such couplings are ideally suited for machine applications in terms of safety, they are not approved for personal protection and therefore do not have CE certification.

Industry 4.0 is changing the market

Humans and machines work together in a network – even side by side. This poses completely new challenges in terms of occupational safety. Machine applications must not only function faultlessly, but also be safe for people.

The aim of this project is to develop a magnetic safety coupling specifically designed for use in manually operated machine and plant areas for personal protection applications. At the same time, the foundations are to be laid for CE certification and marketing as a proprietary series product of the company PROWIN A+W Automationstechnik GmbHv.

In many assembly plants from PROWIN A+W, interfaces between manual work by operating personnel and fully automated, machine processes are used. These interfaces are often found in plants in the form of manual workstations, visual inspection stations or manual loading stations.

In many cases, these system parts are designed as rotary indexing tables, for example, whose rotatability allows components to be swiveled out of the system for visual inspection or for manual assembly steps. But also in other applications, such as swivel drives of workpiece carriers or motorized supported handling devices without rotary but linear final drive, humans as operating personnel and machines as support come very close to each other.

Since these are moving machine or system parts that are accessible to people, it is important that they are intrinsically safe. Hazards or injuries that can result from carelessness, malfunction or unintentional movements during operation must be avoided.

This intrinsic safety can be implemented as the maximum permissible force or energy impact on people at the hazardous point of the plant section. Since the majority of all mechanical rotary or linear end drives use an electric motor as the drive, the maximum permissible force or energy at the end drive can already be restricted directly at the drive motor by limiting the drive torque or the drive speed.

Within the scope of the master project, a safety coupling with magnetic torque transmission, originating from the chemical industry in terms of its functional principle, was developed as a possible series product with CE certification, which can be flexibly applied to a required application by means of a modular principle. The special feature of such a magnetic safety coupling is that the torque transmission between input and output shaft is mechanically completely separated from each other and thus breakage or component failure of one coupling half does not lead to an unwanted blockage or permanent connection of the drive. 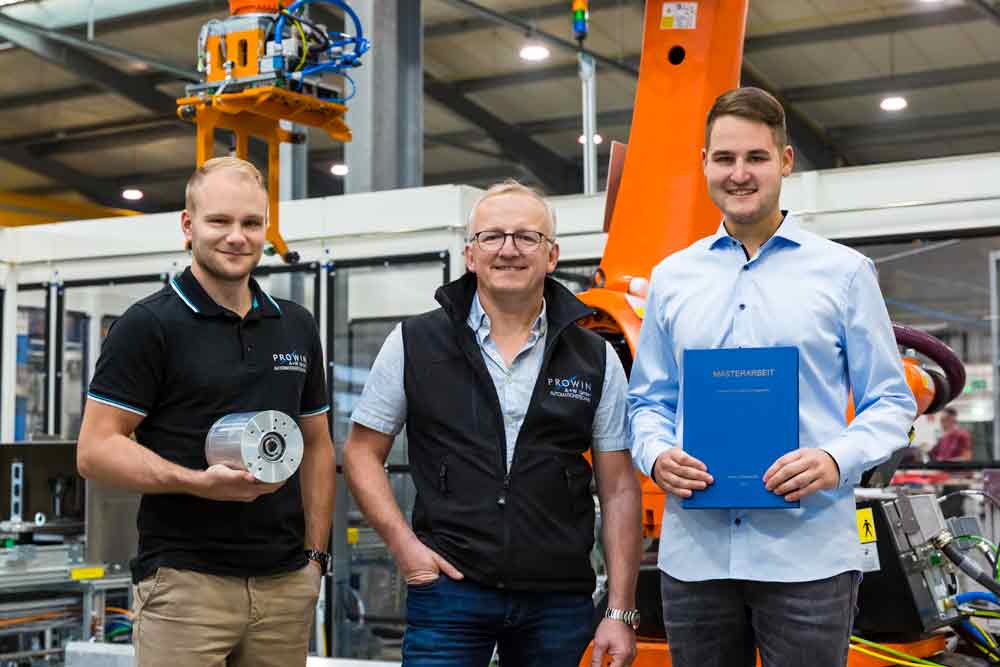 “At some point, the coupling should then go into series production and be used in PROWIN A+W assembly systems as well as in assembly systems from other manufacturers, thus making industrial drives a bit safer again”

The extensive and complex project was divided into two separate master’s theses, thus helping two graduates to obtain their master’s degrees at the same time – and with flying colors. Both theses were awarded 1.0 and at the same time set a milestone for further interesting projects at PROWIN A+W. – a tour de force

Next, the budding industrial engineer Johannes Knollmüller is working on a production test bench for the clutch and on optimizing heat generation on the housing.

Full speed ahead into the mobility revolution